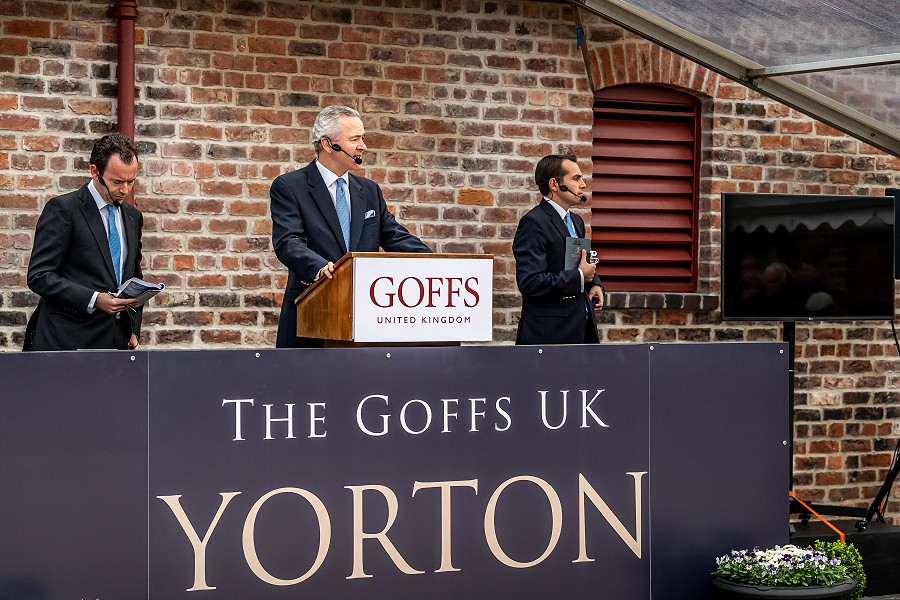 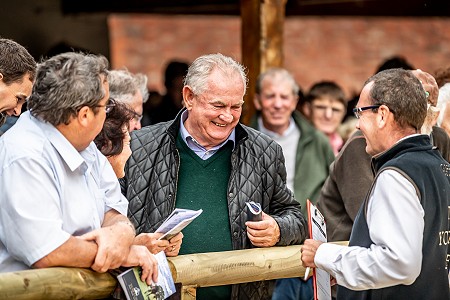 Goffs Group Chief Executive Henry Beeby said: “I’m delighted for David who took such a big punt – we’ve only played a small part. Hats off to him and his team. “The key to a sale is empty head collars and the very high clearance rate is proof that this one has worked. It was lovely that people came to do business, and not just out of curiosity. “This sale has a great future and we would love to be invited back next year.”

Yorton Stud left no stone unturned in preparation for the event. A welcome party on the eve of the auction was a welcome first base for travellers from France, Ireland and the Scotland-based Goffs UK team, while additional, experienced sales staff were recruited and that meant there was no shortage of hands for presale inspections. All the leading agents were present, there was a who’s who of British jumping trainers, a raft of young Irish pinhookers and point-to-point trainers, and such well-known French trainers as Gabriel Leenders and David Cottin. 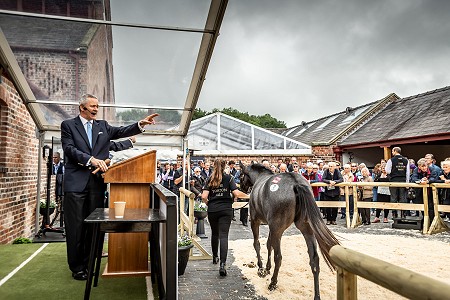 Buyers had several goals – some were end users preparing to give their purchase time, while others were hoping they might get to the races next year in a juvenile bumper or hurdle. There were pinhookers attempting to buy with a view to spinning their horse back through a store sale in 2020, and there were point-to-point trainers preparing to wait until their purchases became four-year-olds before going into action. The key was price, the aim being to buy a yearling or two-year-old store for less than they would make as three-year-olds. 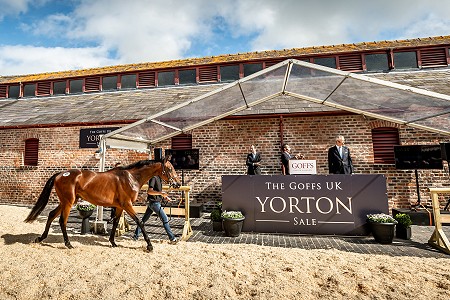 Futter’s son Lester, a partner in Yorton Stud, summed up the day when saying: “It’s been unbelievable, the team has done such a great job, the horses behaved impeccably and it’s been incredible to see the number of people here.

“It’s been strong trade, and I’ve been delighted in particular to see the yearlings sell so well.”

Sales companies are not averse to setting up a sale away from their traditional auction rooms, and in August 1997 a dispersal of stock was held not far from yesterday’s event at Shade Oak Stud in Shropshire. Fortunately, that was a cash generating exercise, and the Hockenhull family regrouped and remain in business today. What made the Yorton Sale unique was a catalogue exclusively of yearlings and two-year-old jumpers, a model that is not uncommon in France, from where Futter has drawn much of his inspiration. 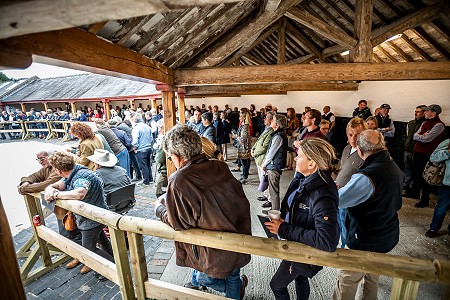 He said: “It has been a far bigger challenge than I ever thought, but we’ve been so well-supported and we genuinely appreciate the people who have come along, not only to buy, but to set the atmosphere up. If we can replicate it next year that would be marvellous. “There has been a novelty to the event, but we priced the horses right and we were happy to do that in order to leave something for the next man or woman.”

Dai Walters, well-known as the founder of Ffos Las racecourse, but an avid fan of Jump racing and a keen racehorse owner, proved to be a critical buyer. He bought five horses for an aggregate of £230,000, including the £105,000 top lot, a No Risk At All two-year-old colt (Lot 11) named Prince Des Fichaux. A son of the multiple-race, blacktype winner Princesse Kap (Kapgarde), he had been bought for €50,000 by Futter and partners at Osarus last year. After seeing off the interest of fellow racehorse owner Stuart Parkin, Walters said: “I’ve got four or five No Risk At Alls, all unraced, and I really like them. This was a nice-walking horse, and didn’t one make a lot of money at Aintree last year?” It did, the horse in question being No Risk At All’s four-year-old pointing son Papa Tango Charly, who made £440,000 when selling to racehorse owner Martin Tedham. 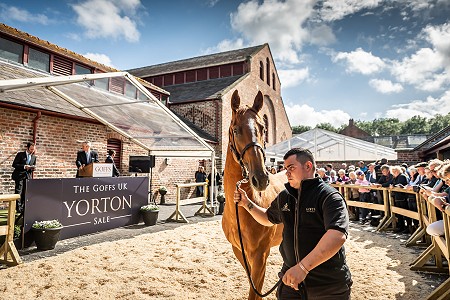 Walters added: “I’ll keep him to race. I like to have ten to 20 two year-old stores and needed a few to get up to that sort of number. I’ve known Dave Futter a long time, and had a share in [stallion] Blue Bresil when he stood here. I might leave this horse here before he goes into training.”

Walters’ other buys included a good-looking son of the late Fame And Glory (Lot 20) who made £60,000. An April foal out of the unraced Presenting mare Gales Present, he came from the Polly Puttens family famous for Denman and Silverburn.

Ace Irish point-to-point trainer Donnchadh Doyle had clearly not travelled from County Wexford just for the marvellous scenery around Welshpool – he has plenty of that at home – and he duly left with two purchases.

The pick was a £40,000 two-year-old Blue Bresil gelding (Lot 21), who was bred by Dave Futter and Will Kinsey out of the Astarabad mare Cutielilou, a full-sister to Gr.1 Champion Bumper winner Cheltenian. No less importantly for Doyle was her first foal, Big Bresil, also by Blue Bresil, who he trained to finish second in an Irish point last season before selling him for £170,000 at Goffs UK’s Aintree Sale. 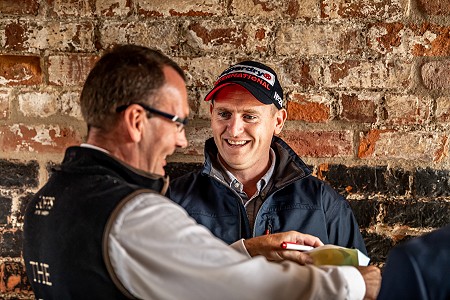 Doyle said: “I know the family, and believe his big brother could be very good. This two-year-old looks the spit of his sibling. I’ve bought him to keep and train for a point-to-point.” No stranger to two-year-old purchases, Doyle has shopped in France for horses in that age group, and welcomed the chance to do likewise in Britain.

He said: “They’ve put on a very good show, and it’s nice to get some stock ahead of next year’s three-year-old store sales. It’s been a good trade, with plenty of buyers. It’s worked well.” His other buy was a £23,000 Pether’s Moon yearling (Lot 34), who was bred by James and Jean Potter out of the mare Lily Potter, a daughter of seven-race winner Potter’s Gale and a halfsister to Gr.2 bumper winner Kayf Grace.

While many horses in yesterday’s sale were bred at Yorton Stud, either by Futter or clients, some had been bought as foals or yearlings with a view to being resold. That proved to be a profitable decision in the case of a Masterstroke two-year-old gelding called Pikar (Lot 19), who had been bought for €6,000 at Arqana’s Autumn Sale last year. His new home will be in Warwickshire with leading young trainer Dan Skelton, whose bid of £28,000 proved effective. Skelton said: “I’ve got another one at home by the sire, a three-yearold who I like, and this one is from a good family. There are seven winners out of the first dam.

“He looks like a horse we can crack on with, so we’ll get him home, do a bit with him, give him a break and then hope to race him next year. He could be a horse to start off in France.”

One horse who will definitely be opening his racing career across the Channel was a son of Scalo (Lot 1), who gave the event a good start when selling for £26,000 to leading French trainer Gabriel Leenders, who is based near Angers.

A two-year-old gelding, he had been bought in utero when his dam, Briska Des Bordes (Vendangeur), was knocked down to Futter’s ally Richard Venn for €20,000 at Arqana’s February Mixed Sale.

Leenders said: “He’s a good-looking horse, with a nice French pedigree and the stallion [whose oldest crop are five-year-olds] is getting winners. I’m confident buying this horse, because we know Yorton Stud very well and have traded horses with David over the years.”

Leenders was involved in three purchases, while his countryman and fellow trainer David Cottin purchased two, the pick being a £22,000 Gentlewave filly (Lot 2) bred by Futter and Will Kinsey. Her French family origins appealed to Cottin, although her most successful sibling, half-brother The Saint James, gained graded race placings over jumps in France and the UK. 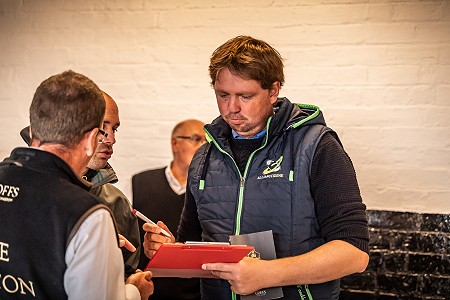 While the selection of two-year-olds on offer were always likely to dominate trade, half a dozen yearlings all found buyers. Bloodstock agent Hamish Macaulay left with two, both colts by Blue Bresil. A half-brother to the versatile hurdler/chaser The Two Amigos, out of the mare As Was (Lot 33), joined Macaulay’s shopping basket following a £26,000 bid, while Lot 32, a son of the winning mare Fiddling Again – a daughter of top-class racemare Fiddling The Facts – made £10,000. He had been bought for €10,000 as a foal. Macaulay said: “They’ve been bought for resale, and compared to the prices given for some of the other horses I’m happy with what we’ve paid. They are two nice horses.”

Highflyer Bloodstock’s Anthony Bromley was another yearling buyer, paying £25,000 for Lot 30, a gelding by Yorton Stud’s resident sire Clovis Du Berlais. The yearling’s dam, winning pointer Atomic Tangerine, is a daughter of Robert Waley-Cohen’s smart mare Perle De Puce. Bromley said: “I’ve bought him for Simon Munir and Isaac Souede. I thought he was the nicest yearling here. Simon and Isaac have plenty of two-year-olds, but a smaller number of yearlings, and it’s nice to put another one into the pipeline. He will probably go to France, start racing there and see where he gets to.

“I also bought a two-year-old gelding by Papal Bull [Lot 27, for £25,000] on behalf of French trainer Francois Nicolle.” Asked for his impressions of the sale, Bromley said: “I thought it was a well-organised affair, there were some nice, athletic horses, and they pulled in some big players in the industry. It’s been a really good first sale.

“Horses are going back to France and Ireland, in addition to those who are staying here, and they’ve been bought by end-users and pinhookers.”

RT @nickluck : Thanks for watching @TheVirtualGN - no doubt the mighty Stewart Machin made that half hour... Here is his colour chart - tr…