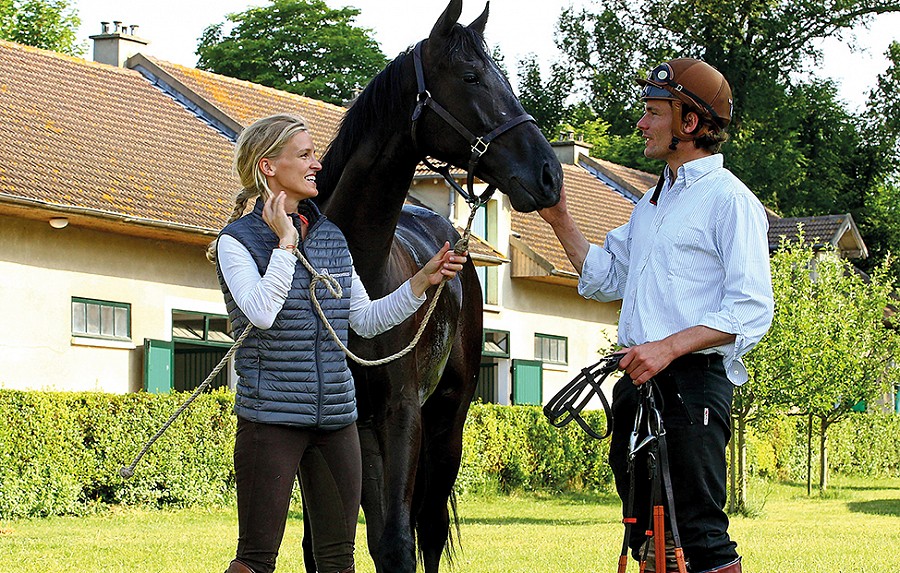 David Cottin is yet to reach his 30th birthday but he has already successfully embarked on his second career after retiring from the first, as one of France’s leading jump jockeys, last summer.

After 11 years in the saddle, with three jockeys’ championships to his name and memorable associations with the likes of Long Run and Gemix, David decided to call time on riding at the age of 27 and concentrate instead on building a training business with his partner Amanda Zetterholm.

The couple have been busy. Not only have they split their time between their main base in Chantilly and pre-training farm near Lion d’Angers since starting training in September 2017, but they also welcomed the arrival of their first child, Winston, in May. Furthermore, during the winter, David operates a satellite yard in Pau for the season. In the preparation of the youngsters in the west of France, however, he has the perfect set-up as this vital stage of the fledgling racehorses’ lives is overseen by his father, former trainer and owner-breeder Philippe Cottin.

“David has a team in Pau from November to February and with his dad we have a satellite yard at Andigné for breaking the young horses and spelling, like they do in Australia,” says Amanda. Among their burgeoning ownership base are a number of British clients, including Yorton Farm.

“We met David Futter several years ago on the Irish Stallion Trail and then we came over for the TBA National Hunt Foal Show to see the farm and stallions and how they worked,” Amanda recalls. “David [Futter] wants to focus on sending young horses to France. I think we educate them much differently here. You can’t say they are more precocious but we break them in and school them much earlier than in Britain. So we obviously start them off racing much earlier too – there’s a great three-year-old programme in France, and also a four-year-old programme, and if they are really good horses we’ll race them in England. That’s the plan.”

The plan already seems to be working with regard to Easysland, a four-year-old by one of Yorton’s stallions Gentlewave, who is owned in partnership with Chris Edwards and has already won over hurdles and looks to be carving out a successful niche in cross-country races winning on his first attempt.

She continues: “David’s father is teaching the young horses and we work in very much the same way with the youngsters as they do at Yorton Farm. Ironically, on the Flat the French are not as precocious as the English horses but with the jumps it’s the opposite. So if jumping owners don’t want to wait until they are four- or five-year-olds they can start them off earlier in France.

“They get broken in at the end of the yearling year, the same as Flat horses, and then they are schooled as two-year-olds. This helps with the mechanical side, to make them as natural as possible. Even if a horse isn’t very good, it can have an advantage because they learn such a good jumping technique.”

Of course a bonus for visiting owners to the Cottin stable is not just the beauty of the training centre of Chantilly itself but its proximity to Paris.

“We’re very close to Auteuil and Compiegne,” Amanda says. “The training tracks here are great. When Francois Doumen was taking horses over to Cheltenham they were all trained here in Chantilly.” With around 40 horses in full training and another 20 to 25 being broken and pre-trained at the Cottin family farm, Amanda admits that David’s life as a trainer is more stressful than his riding days but that they are both enjoying throwing themselves into their new challenge.

“There’s more pressure but he loves it,” she says. “His family have been breeders, owners and trainers for generations so he was born to do it. He learnt everything from his father, so it’s nice to be carrying on the family business and to be working alongside him.” And despite the route from France to England being the more commonly trodden path when it comes to National Hunt horses, David and Amanda enjoy being able to get a broader perspective on the youngsters coming through the in the opposite direction via regular trips to Yorton.

Amanda adds: “We go several times a year to look at the stock. It’s lovely to be able to go out there and see so many well bred, young horses in the field rather than at the sales and to see the stock of some exciting young jumps stallions, like Blue Bresil, who looks to be one of the really upcoming names for the future.” 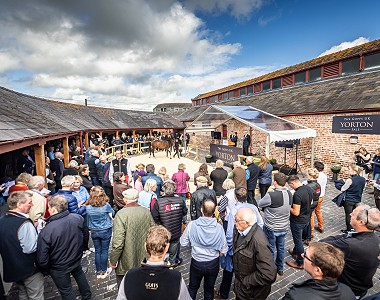